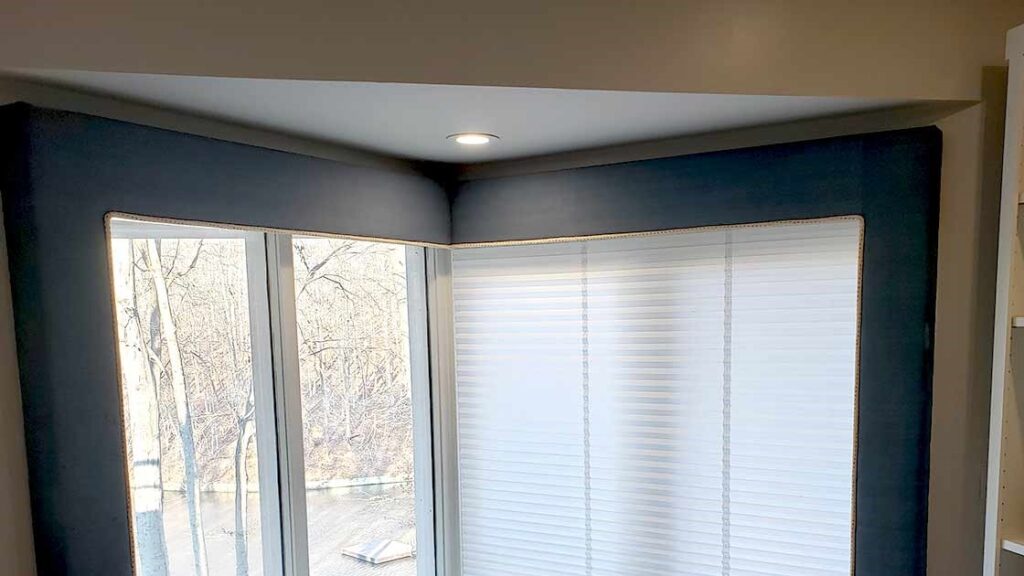 The ones that we had were in great shape but a little dated. Sometime back, we decided to replace the carpet and did not remove the the Lambrequin Cornice boards at that time. The dark blue fabric outlined the windows really well and was acceptable…

“In architecture, a cornice is generally any horizontal decorative molding that crowns a building or furniture element – the cornice over a door or window, for instance, or the cornice around the top edge of a pedestal or along the top of an interior wall.”

The room is also referred to as saw-tooth shaped. There are essentially 10 windows and 1 french door if you include the bathroom. This room had essentially 4 Lambrequin Cornice boards from the floor across both sets of windows and back down to the floor. They were blocking about 15% of the windows on the sides plus the top overhang. We originally did not notice any issue with these at all and somewhat enjoyed them. However, once we did replace the carpet we wanted to get rid of them.

I also had another objective, I wanted to mount the TV on the wall next to one of the windows. It is a rather nice Sony high end TV and I did not want to get rid of it. Mounting in the basement room also made a lot of sense due to the fact that our girls like to play in that room. They also wanted to hook up the Wii to the TV and my old Playstation 3. Once I started to mount the TV to the wall, I could see the cornice boards were going to be in the way.

Removal of the Lambrequin Cornice Boards

We decided to go ahead and take them down. They were not only dusty, even though we ran a vacuum cleaner on them, but they also were holding back light. You see this part of the house essentially points North to North East. So sunlight is almost never getting into this room. When the summer comes, it is really dark as the tree canopy blocks any sunlight from getting to this area.

As I started to remove the boards, (really it was not too hard), I discovered there were 2 mounting brackets up top and wooden mounts at either end of the windows (top and bottom). What I thought might take a long time, turned out to be about 30 minutes of work and clean up. After breaking down the boards we had to get to work cleaning up the area where the wood was mounted. You can see also, due to the mounting brackets there was some work that was needed to repair the sheetrock.

Final Clean Up and Paint

After cleaning with the vacuum, Windex and some other cleaner to get all of the dust off I started to repair the wall and baseboards where needed. Overall, it was more or less a hurry up and wait process. Since we were finishing up the TV wall mount we had plenty of time. Then a couple of coats of paint and general clean up and we were pretty happy with the outcome!

This was just one of many projects on our list and every day a little closer to where we want to be. However, do you ever get there? I just don’t think that is possible. God gives us a heart for working and bringing our creative instinct out in everything we do. Enjoy the ride, take some pictures and blog about it… it is amazing what you can do with a go get it attitude!