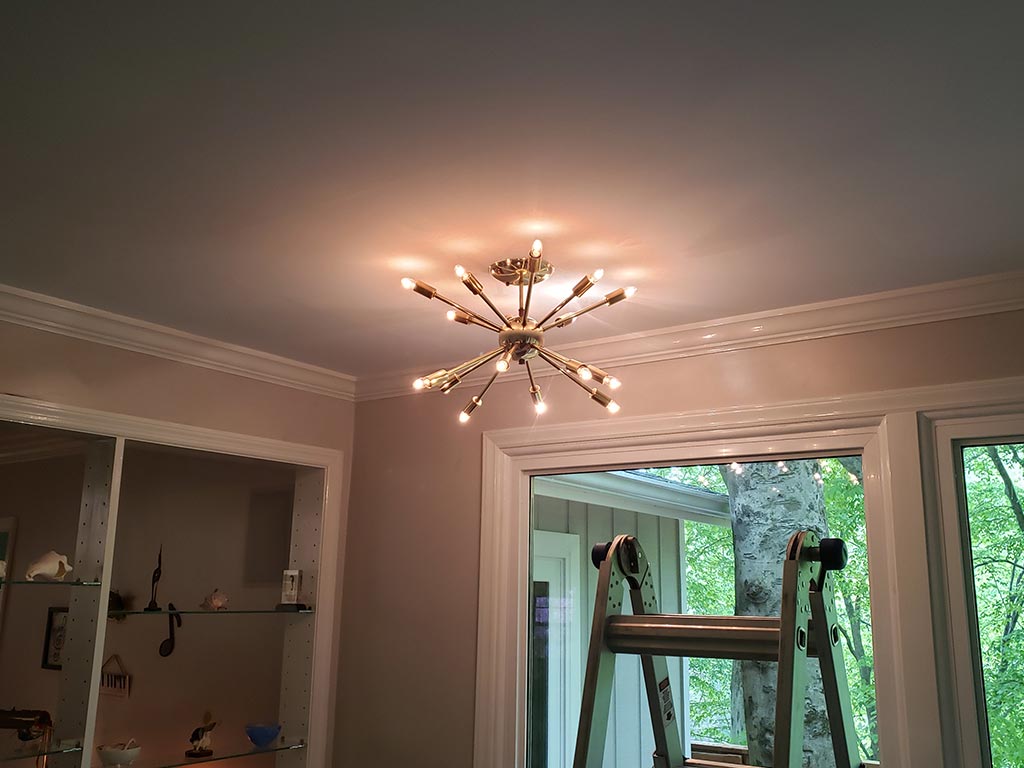 Sputnik and the Dawn of the Space Age

You may or may not know what a Sputnik Chandelier is. The iconic design has been around since the the late 1950’s and carries on to this day. It all started with this one event… I think it is interesting how NASA tells the story about the Sputnik satellite.

History changed on October 4, 1957, when the Soviet Union successfully launched Sputnik I. The world’s first artificial satellite was about the size of a beach ball (58 cm.or 22.8 inches in diameter), weighed only 83.6 kg. or 183.9 pounds, and took about 98 minutes to orbit Earth on its elliptical path. That launch ushered in new political, military, technological, and scientific developments. While the Sputnik launch was a single event, it marked the start of the space age and the U.S.-U.S.S.R space race. Source NASA History

This simplistic lighting design, modeled after the first artificial satellite “Sputnik”, started and influenced versions of this light that is in production to this day. This is also one if not “The” event that kicked off the Space Race. Which in turned inspired many “futuristic” Mid-Century Modern design all across the globe. From lamps, furniture, automobiles and homes. It is a style that continues to influence modern design to this day.

Hunting for an Authentic Sputnik Chandelier

As easy as it might sound, finding something in decent shape from the 1950’s is not an easy task. Sure, you can find smaller items like dishes and other things that stand the test of time. However, a Real McCoy, Authentic, Real Deal Holyfield Sputnik is not an easy task to find. You can find reproductions that are of high quality and also original chandeliers that have been rebuilt. Many new Sputnik Chandeliers are oversized vs. the originals to match how large our homes have gotten. Our goal was plain and simple, find an authentic unit from the 50’s or 60’s in decent condition.

After months of looking on Facebook Marketplace, Craigslist locally and far away, I came across a decent unit on eBay. Price ranges can be anywhere from $400-$600 that need a lot of work to about $3,500 for mint units that can be put up right out of the box. I was lucky and found a chandelier for $580. The ONLY distraction from purchasing it with “Buy it NOW” was the length of the shaft it is mounted to. I ended up figuring out that we could buy a new brass mount that would allow it to hang down lower and made the purchase.

The ONLY difficulty in removing the old unit (that is if you are OK with wiring) was getting the ladder in place. You see, we wanted this to be in the Office / Observatory location. The existing light we put up when we moved in hangs over the staircase to the lower level. The good news is my ladder will fit and lock in pace to span the gap of the opening. With that, I claimed the ladder and took down the fully functional (only 2 year old) unit. IT IS FOR SALE if anyone would want it then let me know.

The company in Ohio that I bought this light from packed the light in 20 different layers. We could not be more happy as when I unboxed it. It looked perfect! It may have taken longer to unpack the light vs. installing it. Either way, we were more than pleased.

We hope you enjoyed this story about finding and installing a Vintage Mid-Century Modern Sputnik Chandelier. Maybe your home has a similar project to update lighting (or take it back in time). The good news is today with the internet resources, you can find steps on how to do anything. Take the moment and get at it. You will look back and be glad that you did!

Thank you for stopping by!